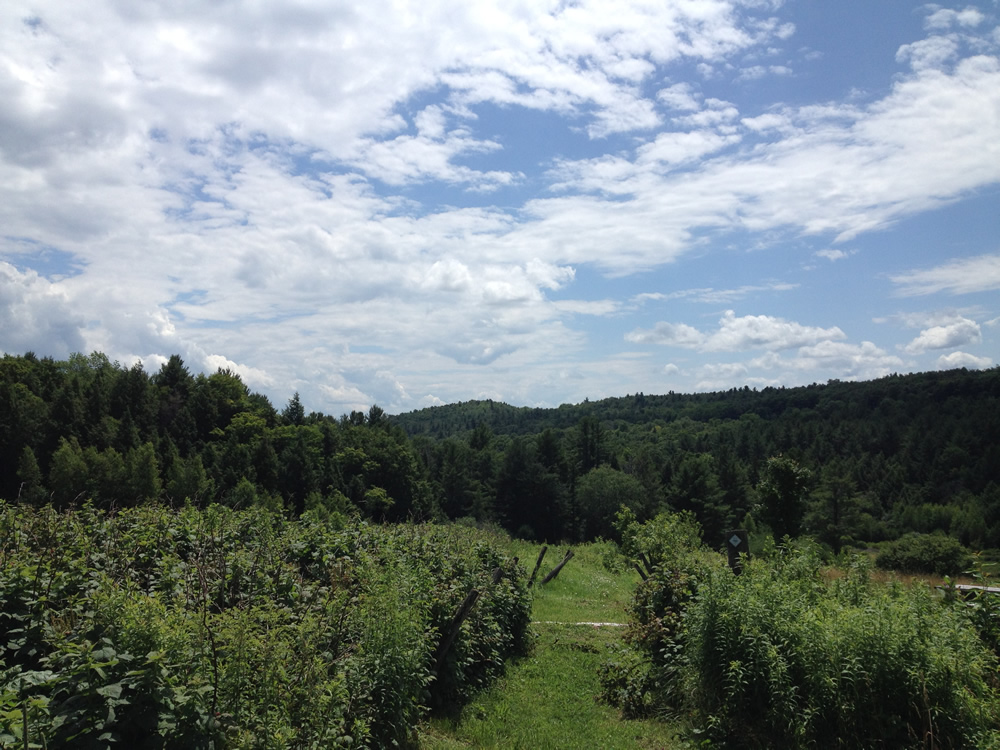 In the spring of 2008, Evelyn Guyette gifted her 107 acre Plainfield farm to the Franklin Land Trust in honor of her late husband Harry Guyette, and his brother, Merrill, and father, Arthur. With this gift, Evelyn ended her family's 78 year ownership of the property and ensured that good stewardship of its pastures and woodlots which characterized their tenure on the land would be continued, forever. Today, the Franklin Land Trust manages Guyette Farm with active agriculture, wildlife habitat, and community enjoyment as its primary goals for the property. Just beyond the intersection of Gloyd Rd. and Old South St., a small parking area abuts the old Guyette Barn and the Raspberry Hill Community Garden, as well as a trailhead for the 1-mile network of rugged footpaths that span the property. This trail is accompanied by a series of interpretive signs which highlight the land use, natural history and management of the property. Following these through the farm's northern pastures offers access to early successional habitat managed for woodcock, the hemlock-shaded Meadow Brook, and stands of northern hardwood forest that once supported maple sugaring.

Additional information: Guyette Farm is about 2¼ miles south-southwest of the center of

The Guyette Barn was constructed in the early 19th century and remains a pastoral symbol of rural history and agricultural heritage. With a footprint of approximately 30 by 40 feet, the barn possesses distinctive features that define the structure as an early example of the classic English hinterland barn. Over time, the barn has been subjected to seasonal stresses that have led to its deterioration, and a poor stone foundation jeopardizes the structural integrity of the leaning barn walls. Currently inaccessible for safety reasons, the barn requires significant restoration before continued deterioration threatens collapse. More about the Guyette Barn