In early September, FLT’s Executive Director Rich Hubbard announced his plans to retire in 2019. After 14 successful years with FLT, Rich has decided it is time to move on and enjoy his new grandchildren. FLT’s Board could not be more appreciative of the fine work Rich has done on behalf of all of us and our beloved western Massachusetts home. Our beautiful landscape of active farms, woodlands and wildlife habitat would be so different now if Rich hadn’t been there to ensure that this valuable resource has been conserved for our future. Rich’s dedication to land conservation, his integrity and his leadership is setting the bar high for our next Executive Director.

We applaud him for his service and appreciate his working with our Board and Staff to ensure a smooth transition.

Rich was interviewed by Richie Davis, a long-time reporter for the Recorder who has observed Rich’s work over the years. 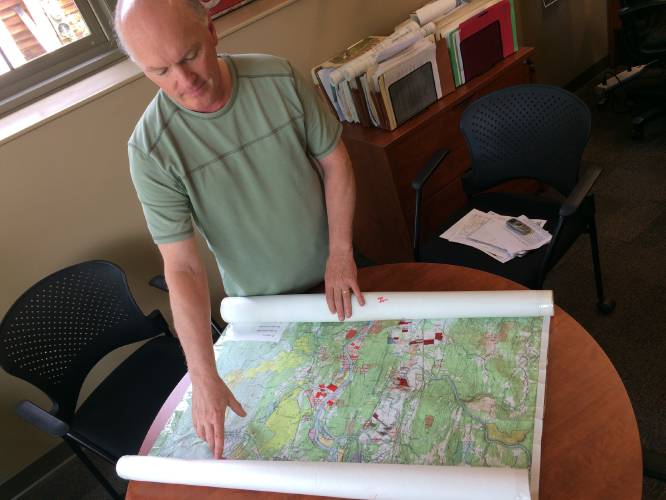 Hubbard to step down after fourteen years in charge

SHELBURNE FALLS — Richard Hubbard, Franklin Land Trust’s executive director for the past 14 years, has announced that he plans to retire sometime next year — leaving a legacy of 41,500 acres of protected farmland and other open space here and around the state.

“This is the most difficult decision I’ve ever made,” said the 63-year-old New Salem resident, who worked for the state Department of Food and Agriculture for about 15 years overseeing its first-in-the-nation state Agricultural Preservation Restriction program.

The program started in 1979, just seven years before Hubbard’s arrival from community planning jobs in Pennsylvania and Connecticut. He earned a master’s degree in environmental land use planning from State University of New York College of Environmental Science and Forestry and Syracuse University.

Hubbard grew up in the Worcester County town of Dudley, where he first became interested in farmland preservation after watching farms give way to development.

“It was a very, very rural community, and it seemed like every time I was coming home from college, there was another farm that had gone under subdivision,” recalled Hubbard. “I was really interested in farmland conservation but was somewhat frustrated with planning because it was more reactive than proactive and tended to respond to subdivision proposals when it was way too late to do anything.”

Hubbard was hired in 1986 as Western Massachusetts field specialist for the state’s APR program, which buys development rights of farms, paying farmers the difference between development value and agricultural value of agricultural land. He moved with his wife to New Salem to be midway between the state agriculture department’s Lancaster office and western Mass, where there was a concentration of farmland being protected.

With the exception of a year and a half as assistant director of American Farmland Trust’s Northeast Office, Hubbard spent the next 18 years at what would become the state Department of Agricultural Resources, managing APR for the entire state and then, serving as assistant commissioner under Commissioner Jonathan Healy of Charlemont from 1993 to 2002 — all the while continuing to oversee Western Mass. APR negotiations.

“That’s really where my passion is,” said Hubbard, who had a hand in negotiating virtually all of the APR projects in this part of the state. He figures he has worked on at least 400 land preservation projects between his work at the non-profit land trust and at the agricultural department.

That work has had a profound impact on retaining the character of this region, says Hubbard.

“Right now, if you looked down on the valley from Mount Sugarloaf, you’d see it hasn’t changed much for probably 150 years, except for UMass off in the distance. It’s still a very, very green valley. That valley would be covered with houses now, if not for the (APR) program. It would be a very, very different place. People criticize it, and farmers get frustrated with it, and certainly there are things that could be done to improve it. But for all its faults, I’m convinced we would not have commercial agriculture in this state at the level we have right now if not for the program.”

Created in 1987, Franklin Land Trust has grown to nine full-time employees from 1½ full-time positions — including his own — from the time Hubbard was hired by former Executive Director Mark Zenick — with whom he had collaborated on several projects.

Over the years, the land trust has protected about 32,000 acres through a variety of programs, and Hubbard says “We have a great organization here, and a great staff here, and I know FLT will continue to do important work.”

The land trust has already begun a search for Hubbard’s successor with hopes of making a choice early next year.

Hubbard said he plans “a year or two to decompress,” after which “I don’t expect I’ll fully disappear from the land conservation scene.”