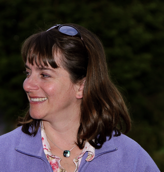 Alain joined the Franklin Land Trust in 2006 as the Stewardship Coordinator and soon moved on to working with landowners to complete land conservation deals in the position of Director of Land Conservation.

Her interest in nature was fostered at an early age where her playground was the Brooklyn Botanic Garden and summers were spent in on her family’s land along Bash Bish Brook in Copake Falls, NY. After completing a degree in Environmental Biology from SUNY Purchase, Alain took time off from school to work and travel across the USA, ultimately reaching Alaska with her future husband. Alain learned her botanical names of trees and shrubs working at Ward’s Nursery in Great Barrington and then she returned to school and received her Master’s in Environmental Studies from Antioch New England. While in NH, she worked for several field seasons with the US Fish & Wildlife Service on the Karner Blue Butterfly Recovery Project and interned with the NH Nature Conservancy which ultimately focused her towards conservation and a part-time position as Stewardship Assistant for the NH Land Conservation Investment Program.

After working for six years at Mount Grace Land Conservation Trust, she joined FLT. Alain recently moved to Worthington where she shares the woods at the end of a dead end road with her husband, daughter, yellow lab GiGi and other inhabitants.