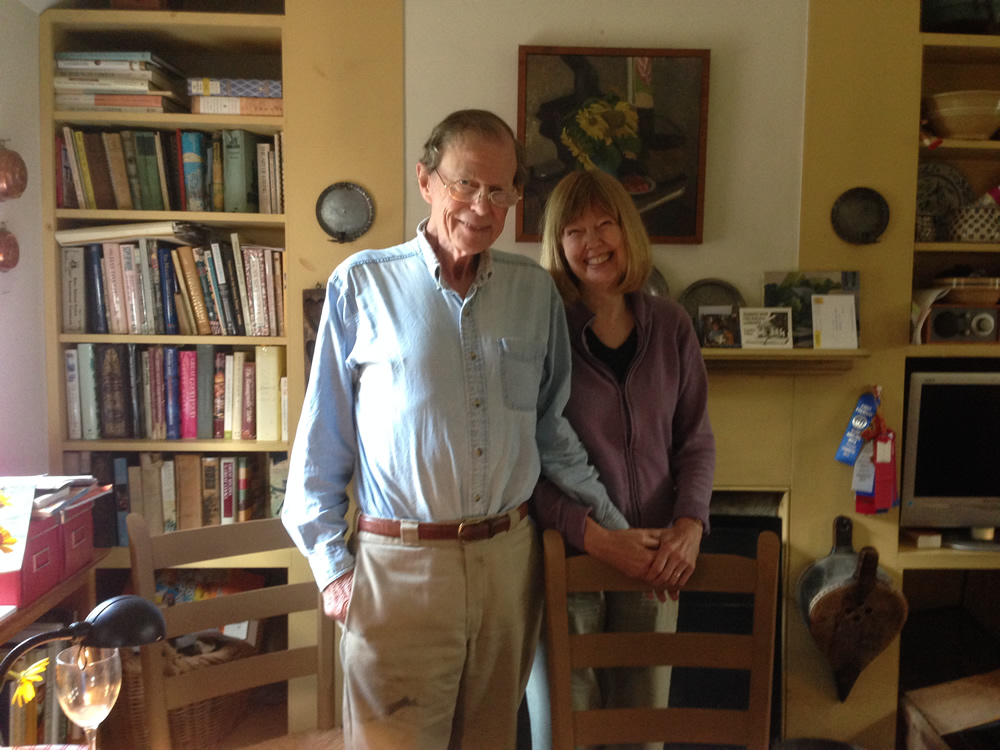 Dick and Susan Todd no longer own the land they protected. They live nearby. "It's more of a comfort after you've sold it than before," Dick says. They raised sheep in a field that’s still a field. They walked in woodland where a stream they called "hidden river" is still hidden. The farm they owned is still a farm. And the new owners, Ken and Barbara Miller "are perfect owners from my standpoint," Dick says. "He takes wonderful care of that field… We are very happy to keep it in one piece. I’m always very cheery when I go by there."

Franklin Land Trust provided help in conserving the land, and also became a means to community involvement. Shortly after they moved to Ashfield in the 1980s, Dick met Mark Zenick, FLT’s creator and sole employee at that time, who also lived in Ashfield. Dick joined the FLT board in 1995, and was its president from 2005 through 2008. In the early years, he says, “We were much less organized. Mark would convene an extemporaneous committee meeting. Most of the work was done on the back of an envelope.” But the organization “had to grow, had to become more organized. Land trust work isn’t done when they take a CR. We become stewards.”

During those years, Dick says, “We did some important and complicated deals to broker arrangements between farmers and the state.” Dick “saw the place go through huge changes,” he says, and was “thrilled when Rich Hubbard agreed to take over the land trust. I felt I’d seen the place enter another era.” He notes with pleasure that after 25 years, the land trust has protected 25,000 acres.

The Todds moved to their farm in Ashfield after a five-year love affair with farming near Westminster where they had a farm stand with a neighbor and raised pigs, sheep, chickens, a couple beef steers, and three young girls. “We were 1970s back to the landers,” Dick says, but, as Executive Editor for the Atlantic Monthly, he was a “back-to-the-land commuter,” driving daily to Boston.

Both had never farmed before. When he was very young, Dick had lived on his grandfather’s farm. “I have vivid and affectionate memories of it,” he says, but no experience that would give him confidence concerning farming. “I didn’t think about it,” Susan says, “I just did it.” She had become enamored of rural life while working in summer stock in Dorset, Vermont. “I was so impressed with how people lived in the rural Dorset area,” she says. And she learned a little from the observations and lessons in Robert Frost’s lesser-known poems, and from the work itself. “There was lots I felt I didn’t do well enough,” she says, but “being close to the land gives you the opportunity for so much learning. I loved all the thinking it enabled you to do. I wrote eighteen pages once on the lessons of weeding.” And there were other lessons, such as “not noticing things going wrong and then waking up to the observations.”

Farming and raising three girls, Susan went about her chores with a child on her back, and remembers joyfully that her youngest girl’s first sentence was “Feed big pigs.”

“We knew from that, if not before,” Dick says, “that we were committed to living in a rural setting.” So, after an interim period living in Boston, purchasing their farm in Ashfield became a logical next step. They had gone to Amherst and Smith colleges, and loved the Pioneer Valley. Their farmhouse in Ashfield was intended “as a weekend house,” Dick says. “That wasn’t gonna last. In the 1980s we moved here full-time.” They raised sheep, and kept a few chickens.

As an editor for Houghton Mifflin with his own imprint, Richard Todd Books, Dick continued to commute to Boston but was able to work partly from home. Susan went to the University of Massachusetts for her teaching certificate, and taught elementary grades in Colrain, which involved field trips to Catamount State Forest, with its mix of natural and human history. Later, as principal of Heath Elementary School, she emphasized environmental education.

Susan has initiated an Ashfield Trails Committee. “It seemed it would be a good partnership with FLT,” she says. It’s not a committee under the town umbrella. “People like to give money to an organization instead of a renegade group. We were just a gorilla group that started building trails.” Now, there are twelve to thirteen miles of trails, and more to come. The initial trail system is like a spine, she says. “Lots of smaller trails can hook into it. The trails go through people’s land, which is huge. We worked with a lawyer for the land trust. He helped draft an agreement with the landowners. It’s not a legal easement, and not permanent. It’s simply an understanding.”

“People become owners,” she says. “They use it. They can walk out their doors and have a place to walk.” At the height of the recession this meant recreation close to home. “Mountain bikers have given us money. Our committee is so wonderful,” she says and joyfully lists the members and their variety of talents. “FLT was so important to us to get going. Now people just send us money. They are so grateful to have places to walk.”

And places preserved, through which to walk. The Todds have worked to create both. They have protected 158 acres through gifting five separate restrictions. And they have spread the idea. Recently, in cooperation with their neighbors, Alex and Rebecca Jacobson and Chris Farley, they bought and then protected land on the corner of their road.

They now live near the farm they conserved, in an old farmhouse they restored honoring the vision of the initial builder. That meant, for instance, removing windows that had been installed incorrectly and were stylistically inappropriate, and replacing them with windows that were appropriate to the time, raising the openings to their original locations. “There is something similar in my interest in restoring this old house and preserving land….the forces of the modern world are pretty strong and need no help from me….the past and its architecture and landscapes have some claim on our attention. So I’m happy I’ve done what I’ve done.”

Dick has written a book of essays, musings on authenticity. In it, he comments on the role of nature and rural life in society:

Rural life….preserves something as valuable as open space, or clean air, or unpolluted streams. It provides a sense of wholeness, an organic environment that accords with out deepest sense of the order of the world. There is something else: its patterns stand apart from conventional social hierarchies. In fact a well-ordered countryside embodies a species of egalitarianism….wealth and modest means, or even poverty, are more apt to rub elbows, and you have a harder time judging people’s net worth by the size of their house. And this is …agreeable because the houses look more like dwellings and less like symbols…..Here a house, big or small, may distinguish itself by its age or its relationship to the land, or its intrinsic beauty. Only in the country can one cling to the dream of a classless landscape. It is something worth saving….