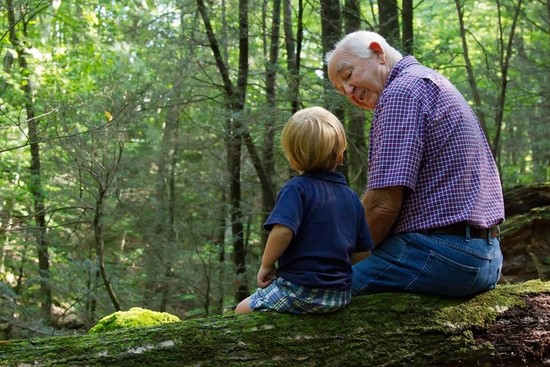 About five years ago, in Tony Borton’s woods in Conway, lightning struck a tall hemlock. The tree “just exploded” Borton says. A splintered trunk like petrified flames remains, and shards lie scattered all around. “Later that summer,” he says, pointing to another tree nearby, “I looked at that hemlock and its bark was splitting.” Others followed, all of them affected by the strike that had traveled underground. Now, in the opening, the sun has encouraged new growth, tree starts and asters.

In their own way, Borton and his late wife Anne have started a life-giving explosion, first protecting their 112 acres with a CR through the Franklin Land Trust, and then influencing their neighbors. Now, Borton says, “almost 800 acres are protected.” These properties abut the Conway State Forest and land owned and managed by the Massachusetts Division of Fisheries and Wildlife, creating a huge block of protected land. “I can go all the way from here to Williamsburg without crossing a road,” he says. To encourage that protection, Tony and Anne held a neighborhood meeting. “We thought it’d be a good idea for the neighbors to know what was going on. Out of that meeting, several said, ‘I think this is a good idea’.” And afterward, he says, “I would take a packet of materials with me explaining how to protect your land.”

In 1964, the Bortons fell in love with and bought what had been an old dairy farm. A professor in the department of Veterinary and Animal Science at the University of Massachusetts, Borton “saw what happened on Route 9 and between Sunderland and Amherst. Anne and I just couldn’t bear the thougt of it being developed,” he says. They talked with FLT representatives and initially purchased an Agricultural Protection Restriction (APR), then later changed it to a Conservation Restriction. (CR). “I didn’t want to tie the hands of future owners,” Borton says. “If someone wants to raise Christmas trees, okay. Some people write ‘No pulic access.’ We want people to use the land. It’s the people who love the land who save it.”

People walk dogs and ride horses in Borton’s woods, sometimes entering from trails in abutting land. The Franklin Land Trust checks the property annually and will continue its stewardship, ensuring that whoever owns the land isn’t violating the details of the CR. Likewise, the Conway Conservation Commission, which owns the CR, walks the perimeters, looking for things such as new dumps and other pollution.

Borton’s land rises from about 650 feet to almost 1000 feet above sea level. “There are two important streams with nothing above them, coming out of undeveloped woodland,” he explains. “Both go down to the South River. It’s important to protect our water sources. Water is so important to the future of our civilization.” He mentions an old cellar hole on Johnny Bean Creek. Johnny Bean built his cabin high, where the water was pure.

Once an orchard, the land became a dairy farm in the 1930s when “apples weren’t worth anything. A lot of people don’t realize butter was such a commodity,” he says. The Bortons moved here from Michigan, bringing Arabian horses, and have raised them ever since. They ran beef cattle for 20 years, mowing and baling their own hay. Now, three horses graze in a pasture that contains a shed open to the south, providing shelter but not enclosure, a more natural environment for the horses, Borton explains.

At 80, Borton rides often, and he walks, taking his German shepherd, Sukee. “I don’t know if I’ve missed a day this year,” he says. We stop before a black birch, a white birch with its loose paper bark, and a yellow or curly birch that have grown near each other, not by accident. Noticing them when they were young, he girdled competing hemlocks nearby. “I’ve been trying to do forest management over the years,” he says. “I’m partial to hardwoods. Hemlock was almost a weed tree until we started losing it.” His woods, once pasture, contain trees 75 to 80 years old, with an occasional older maple or birch, one “the cows got under.”

Water tumbles over a cascade of moss-covered rocks. “This little stream has 25 waterfalls of a foot or more,” he says. Hobblebush, a wild viburnum, grows at its edge. “The flowers are so unusual it just blows me away, white on the edges, yellow in the middle.” Blooming in early spring, he’ll see one and think, “Oh there’s a flower!”

Animal signs are everywhere. A beaver standing in deep snow left tooth marks high on a black birch. Borton, who heated his house with wood for 32 years, had to compete with beavers. One year, he cut down a tree near the pond. “I trimmed off all the braches. I came back the next day and all the braches were gone.” He then cut up the trunk, leaving the logs, and when he returned “they’d rolled ‘em down the hill into the pond.”

In winter, “We get a lot of otter slides,” he says. “They look like they have so much fun. They come down the hillside and go back up again, just like kids.” And one summer he and his wife could sit on chairs by his pond and watch fox kits playing.

Borton has kept small pastures open throughout the forest. Originally he cut down all the brush at the edge of the pasture, he says. Now he cuts back only one side of it each year. “Regenerating forests are what wildlife need. The field edges provide great browse for deer. In summer, they are grazing animals. In winter they are bark and twig eaters.” He recalls one winter, trying to feed a “beautiful buck. I brought over one of my nicest bales of hay. He wouldn’t touch it.”

Borton’s house overlooks a pasture, a nesting ground for bobolinks. “They come each year between the 10th and 15th of May,” he says. “By the 4th of July the young are flying and by mid-July they are gone back to Central America. They nest on the ground. The young wander through the grass and the parents get frantic trying to find their feeding young.” To provide habitat, he says, “I don’t cut my hayfield until the first of August.” And he has removed a row of trees to “get rid of predator corridors,” opening up 15 acres. Behind the pasture, native blueberries have come in. “Birds and bears love it,” he says. “I don’t get any.”

Borton’s care of his land is everywhere—little pastures, a stand of pines deliberately created, bridges across streams, all labors of love, he says. Recently, in Springfield, he saw “people crossing from this building to that building and thought, ‘I’m glad when I go out I’m not seeing concrete’.”

So he continues his efforts. “Every time somebody puts a CR on their land or there’s a change in the tax law I write a note to the neighbors,” he says. When he visits he always carries materials with him and laughingly says, “Oh, here he comes again!” He talks with town folks about land protection, the process and details, names of surveyors, lawyers, people who can help. “My philosophy,” he says, “is not only to be an advocate but to be a facilitator.”