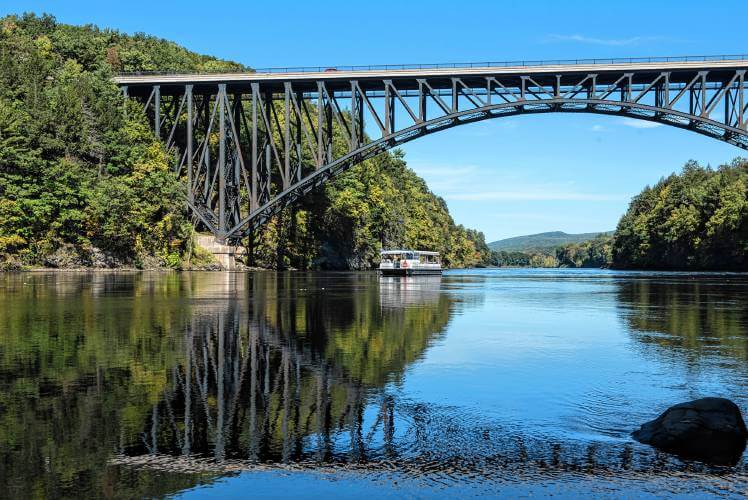 Those who appreciate the pastoral nature of Franklin County owe that rural ambience to the many landowners and farmers who shield their fields and forests
from development. Many of them work with local land trusts to preserve that protection in perpetuity. And so it is we all — residents or visitors,
driving or bicycling — get to enjoy this picturesque backdrop in our travels.

Franklin Land Trust has protected 34,000 acres in our region over 32 years, for example, and since 1986, Mount Grace Land Conservation Trust has helped
protect more than 32,000 acres in this region. But much of that land is a backdrop, not center stage, which is why we were thrilled recently to see
one of the Franklin Land Trust’s most recent acquisitions, which has locked in the scenic view from the French King Bridge.

The 5.39 acres near the French King Restaurant and Motel is a key component of the Connecticut River’s French King Gorge seen from the iconic landmark
bridge between Erving and Gill. The view has attracted people worldwide to see the gorge since the bridge was built in 1932.

The Nov. 27 acquisition from the Prondecki family, which has owned the land surrounding the restaurant and motel since the 1950s, completes purchase of
the four corners of the gorge around the Connecticut River bridge that connects Gill and Erving on Route 2.

Although one of the smallest of the more than 450 properties Land Trust Executive Director Richard Hubbard has conserved over nearly 40 years, “This is
one of the most significant, because it’s part of that view-shed from an iconic site in Franklin County,” he said.

Frank Prondecki, whose family has lived in Erving the entire time he was growing up, knows the value of this move and the view from the bridge, like
no one else.

“People from all over the world go out there and take pictures,” he said recently. “It’s not just fall — every season there’s something beautiful
to look at: the river, the ledges, French King Rock …”

The land trust, which tends to work as a matchmaker in these kinds of conservation efforts, plans to transfer title of the Prondecki land to the Massachusetts
Department of Conservation and Recreation, which already owns 40 acres from the northwest corner of the bridge in Gill, which it purchased in 2003
from the Giknis family and 14 acres on the southwest corner, which it purchased in 1999 from the Sullivan family.

The rest of the riverbank north and south of the bridge are owned by the state or land trusts through strategic purchases over the years from landowners
like Prondecki who appreciate the vistas present a greater, immeasurable value when kept pristine for generations to come.

So, we salute the Prondecki family, their many neighbors and their land trust partners who have preserved a beautiful view of a river that has been central
to our experience for years and our region’s history for centuries.

Posted in Featured
← Conserving Land for You (Annual Report)Land for Sale, Cummington →