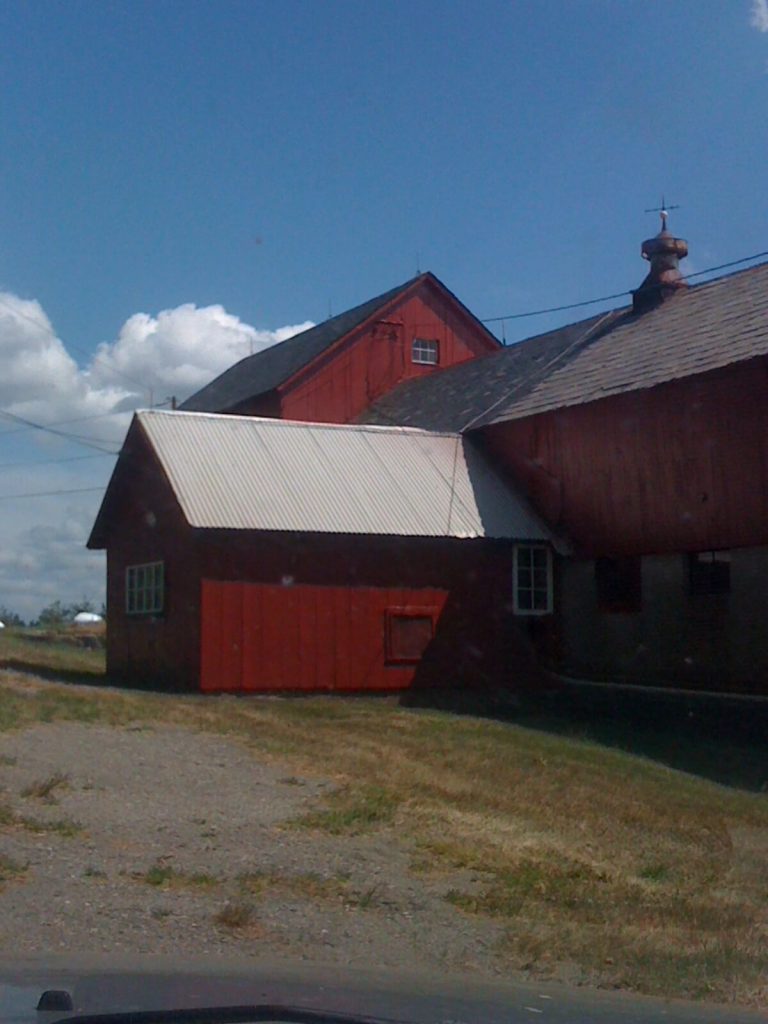 Not far from her barn, the kitchen door to Caryl Dyer’s Bernardston farmhouse stands open. Enter here. Of course. This is where she cooked for her two sons and her late husband Ed, and where she canned, many days, year after year. “It’s not “What do you do today?”” she recalls of the harvest from her garden. “It’s ‘What vegetable do you can today?’ You have to do the vegetables when they’re ready—corn, string beans, shell beans, beets, carrots, tomatoes.” She made apple butter, apple sauce, strawberry jam, grape jelly from wild grapes. She froze raspberries and blueberries.

She had thought to herself, “Oh boy, I’m gonna love this in winter.” But preparations for Christmas followed. “After Christmas, having neglected my home all year I would clean it thoroughly, day after day…before raking the lawn in spring.” Vacations? “My husband would take us to a lake sometimes.” But on a dairy farm you are “tied to the tail of a cow.”

“I don’t walk very well any more,” she says at 91, leading the way to her parlor. ‘I’m glad I can still perambulate.” As she sits in her overstuffed armchair, not slouching and not rigid, it’s not hard to imagine the girl who drove a tractor, dosed a sick cow, tended chickens, planted and harvested a huge vegetable garden, and worked as the town librarian two days a week. The word “frail” does not apply to Caryl Dyer.

“I used to love to walk” she says, mentioning “a place down the back road especially nice in the spring when the warblers came back. I used to stand there and listen. I had been a city girl. I found it was interesting to see the wildflowers and birds. I’d identify them.” She nods in another direction, uphill from the house. “I used to walk this hill. You look down to some pasture land, over a hayfield to the woods beyond.”

And she remembers standing near her pond, watching two snapping turtles “fight in water, very slowly. One did bite a piece of shell off the other one. I could get close enough so I could hear them breathe. I suppose it was a fierce fight.” And then, speaking of peepers, she says. “I love those.”

So it’s not surprising that she has protected her 130 acres with an Agricultural Preservation Restriction (APR). “I wanted to keep it as agricultural land,” she says. “I used to think, What would happen if it was sold, divided up into lots to build houses? One evening our church had a meeting and invited some people from the Franklin Land Trust to talk. I’d never met any of them before but one said, ‘Oh Mrs. Dyer, how nice to see you!’ After the presentation I thought, ‘Okay, this looks like a good idea.’” The process was easy, she says. “Some people came to see me. They walked over the land. They drew up the agreement.”

“I do allow some people to hunt. They’re supposed to ask first. They come up from Greenfield the back way,” she says, with no real concern. But she speaks differently about snowmobiles. “I do not like them tearing around here at night. The police put a stop to it. And a neighbor kept an eye out too.”

Her land, about 15 acres in cropland, 20 in pasture and the rest in woodland, remains nearly as it was when she and her husband raised 50 head of cattle yearly, mostly milkers, some heifers, and a bull. Today, a neighbor cuts the hay. “It’s good for both of us,” she says, “For me, to get the hay out and not let it grow up to weeds.”

Now, no herd waits to be milked, no dogs at their heels bringing them in. But she remembers one small dog who would “chase three or four and stand at the doorway, laughing, mouth open, ha ha ha, look what I did.” And others, she said, could round up ones that had strayed far. If it didn’t work to call the herd in—her husband “could really make his voice heard,” she says—he would “take the car and a dog and say ‘go get’em’.” But generally ”they would know what time they should come back to be milked.” Even when the time changed, she says, it would take only a day or two before “they would get so they knew.”

The cows were primarily her husband’s work. She ran the household and the kitchen. Once, the kitchen became a surgery. “I had to operate on a chicken, a Rhode Island Red. It’s breast was distended. My husband brought it down to the house…I laid her on the kitchen counter. She was very quiet, I cut down through her breast. Sure enough, there’s all this food that hadn’t been processed. I had to sew her up with Aunt Lydia’s carpet thread. She was quiet the whole time. After I sewed her up, he took her back to the henhouse….In another day or so you couldn’t tell her from the other chickens….It was just something I had to do,” she says.

The chicks came in batches of 300. “They were not much more trouble than having 50,” she says. “We did get some roosters. They were lunch.” In the evenings, she carried them in to roost, two in each hand, upside down, by the feet. “They would climb up and settle down. Chickens are not that fussy.”

Caryl and Ed Dyer met in elementary school in Bernardston. “We didn’t become friends until we were juniors or seniors in high school,” she says. She went off to Kent State, majoring in English, and he “got drafted. He went everywhere….I started wearing a diamond.” After they married, Ed “went to work for the General Electric Company in Pittsfield. After a very few months they went on strike,” she says. His father, who owned the dairy farm offered him work.

“I wanted to go to library school but there was no money to do that,” she says. Fortunately, some years later, when their the children were in school, Caryl became Bernardston’s librarian. “Working in the local library here didn’t require a library degree. We were open two days a week. It was just me and a high school girl assistant. I used to do that when I was in high school. I got the munificent sum of $50 a year.”

Caryl Dyer still works in the Bernardston library, volunteering on Wednesdays. “Tuesdays are my Greenfield day,” she says. “I go to the Register of Deeds where I do research. I’m trying to trace back places up here on the hill.”

Her own house was built by a Hessian soldier, “either in 1784 or 1789…..I guess it was well-built,” she says. “They picked a good place.” There are streams, “one right back of the house, and a spring across the road where we get our water.”

In her parlor, hand-hewn pine beams glisten, dark with age. Paintings, rural scenes and abstracts, rest on pale blue and white wallpaper. And outside, her red Ford Focus waits to take her somewhere.