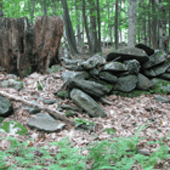 Four generations of Sarafins have farmed the fields and forests of Maple Acres Farm. In 1941, Henry and Priscilla Sarafin began farming the land where they raised four children. Priscilla captured the landscape she loved in oil paintings, and Henry logged their woods with a two horse-powered rig—literally pulled by a pair of Belgian draft horses. Henry managed their woodlands in this environmentally-friendly way and also worked with the MA Division of Fisheries and Wildlife to do low-impact timber cuts in the Hiram H. Fox Wildlife Management Area, which abuts Maple Acres Farm. Henry worked the land into his seventies with his sons: haying the fields to feed their horses, harvesting trees, and milling lumber at the farm’s sawmill. In the fall, they would give hay rides to people visiting nearby Ireland Street Orchard.

Today, the family continues living off the land. Henry’s sons, brothers Kim and Paul Sarafin, manage Maple Acres Farm, milling timber, raising a small herd of beef cattle, haying their fields and seasonally haying fields owned by the Department of Fish and Game to encourage nesting by wood-cock, turkey and grouse. But times are harder. The nearby orchard is no longer in business. Timber is infrequently harvested from state lands. Lumber prices went down after the housing market collapse and economic downturn. Aging equipment needed to be replaced. Barns needed to be repaired. Running a farm is never easy, but this past decade has been particularly hard.

The Sarafin family looked for ways to help with needed investments in the farm. In 2005, they enrolled in a Farm Viability Covenant. In return for committing to continuing to manage the land as a farm for 10 years, they were awarded funds to help improve their operation. Later, they were contacted by AT&T and signed a lease agreement for a cell-tower to be placed on their land (yet to be built). The final piece of the plan was the family’s application to conserve the land through
an Agricultural Preservation Restriction. This would allow the family to permanently sell development rights for the farm, adding value to make the farm secure while retaining all the land within the family for future generations.

The land comprises approximately 30 acres of field and buildings, with the balance of 40 acres in forest. In 2012, the Sarafin family, reached out to Franklin Land Trust to help them through the long, complicated process of working with the state to conserve their land. The APR ultimately required more than two years to complete and involved outlays for survey and other needed legal work. Franklin Land Trust worked with the family to obtain grants from The Westfield Wild and Scenic River Committee and the 1772 Foundation to help offset these costs.

The land itself is a “hole in the donut,” surrounded by nearly 8,000 contiguous acres of publicly protected land and centered on the nearby east branch of the Westfield River, designated a National Wild and Scenic River. The protected land includes the 3,200 acre Hiram H. Fox Wildlife Management Area, managed for wildlife habitat and recreation by the MA Department of Fish and Game (DFG); 2,430 acres of the Knightville Dam Wildlife Management Area, also managed by DFG and containing a campground maintained by the US Army Corps of Engineers; 2,343 acres of the Gilbert Bliss State Forest, owned by the MA Department of Conservation and Recreation used by the public for hunting, hiking and picnicking; and The Trustees of Reservations’ Chesterfield Gorge. The Hiram Fox WMA includes 1,000 acres designated an Important Bird Area, selected as a site for long-term study of forest nesting birds such as the Red-eyed vireo, Ovenbird and Black-throated green warbler.

In May 2014 the land was conserved, allowing the Sarafin family to continue owning and stewarding the land their parents had loved. Fifty-four acres of the Sarafin farm are now protected by the APR, leaving aside 16 acres with the house, sawmill, cell-tower exclusion and additional land for a potential home for future generations. Paul Sarafin’s son Ben and his two sons, Michael and Henry, are already involved in managing the farm. They help with the haying, lumbering and milling. And young Henry—named after his greatgrandfather—has started a maple syrup enterprise. He began with 25 taps in 2013 and has expanded to nearly 75. He hopes to keep it growing for the next generation in this farming family.