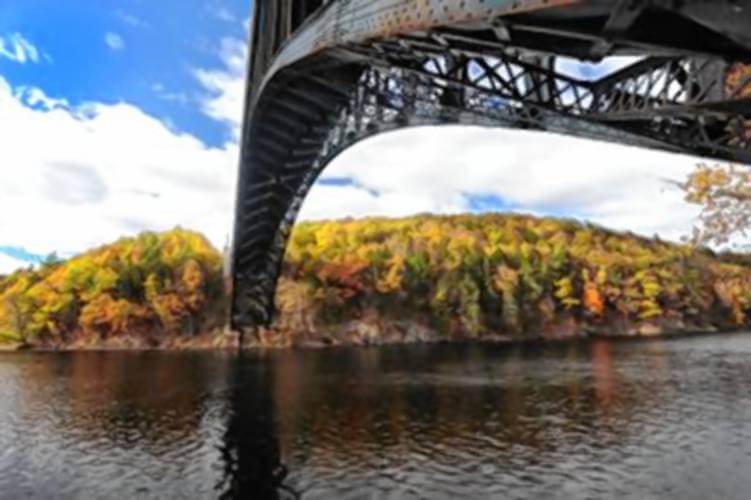 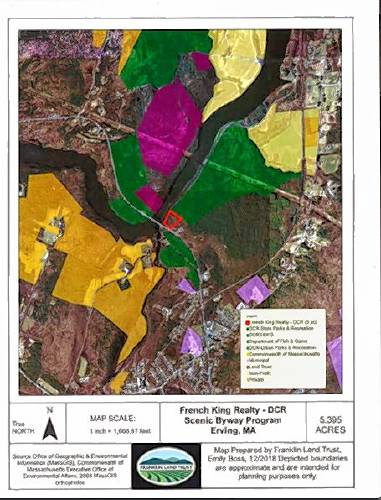 ERVING — The view from the French King Bridge is stunning, drawing visitors to stop for photos or to simply take in the panorama year-round.

What those visitors may not know is that the view is protected though land preservation efforts like the 5.39 acres recently purchased by Franklin Land.
That land is just west of the French King Restaurant and Motel.

The Nov. 27 acquisition from the Prondecki family, which has owned the land surrounding the restaurant and motel since the 1950s, completes the four corners
of the Connecticut River bridge that connects Gill and Erving on Route 2.

Although one of the smallest of the more than 450 properties he’s conserved over nearly 40 years, he added, “This is one of the most significant, because
it’s part of that view-shed from an iconic site in Franklin County. The big concern I’d had was somebody clearing that knoll there and putting a house
on it so they could look up the river. Can you imagine standing on the French King Bridge and seeing a house cantilevering out over that bank? That
would have just totally destroyed this scenic and historic resource.”

Prondecki, whose family has lived in Erving the entire time he was growing up, said conserving the parcel — part of a 138-acre piece of land —
“is bittersweet for me. I don’t have the pride of possession, but it will be preserved for a long, long, long time. It’s the thing to do. I know every
inch of that land. I get wood out there and have done hiking, hunting, mushrooming. We built forts up there, my kids built forts there.”

Protecting all four corners, he said, is important.

“People from all over the world go out there and take pictures,” he said. “It’s not just fall — every season there’s something beautiful to look
at: the river, the ledges, French King Rock …”

Although the property is now owned by the Shelburne Falls-based land trust, which has conserved about 34,000 acres overall, Hubbard said it will be transferred
to the Massachusetts Department of Conservation and Recreation.

The state DCR already owns 40 acres from the northwest corner of the bridge in Gill, which it purchased in 2003 from the Giknis family and 14 acres on
the southwest corner, which it purchased in 1999 from the Sullivan family. On the southeast corner, in Erving, Franklin Land Trust purchased 11.1 acres
of the Carroll property, Dorsey Road and Route 2, in 2012 and granted it in 2013 to DCR, which bought another 16.7 acres from the Carroll family in
2009, according to Hubbard.

A large swath of land north of the bridge in Gill is owned and protected by The Nature Conservancy, he said.

Franklin Land Trust has also acquired a conservation restriction on 16.5 acres along Route 47 in Montague near the Sunderland town line, with support from
the state’s Scenic Byway Program.

The restriction on land owned by sisters Elaine and Janice Kachavos, who bought 18 acres for their Xenophon horse farm in 2002, is significant, not only
because of the scenic value of the property, said Hubbard, but because it provides endangered species habitat. The restriction is held by the town
of Sunderland, which has an contract with the land trust to monitor and maintain the property.

Elaine Kachavos said their concern over land protection was born when a developer announced, soon after they bought the former dairy farm, that he planned
to develop the 40 acres just south of it.

And, the sisters discovered that it sat on an aquifer that provides water for several towns, as well as an effort by neighbors to have that land protected
by Valley Land Fund.

“Once we realized we’d managed to save something pretty important, we pretty soon decided we wanted make sure this didn’t get developed. It just seemed
too vulnerable,” Elaine Kachavos said.

Link to the story in The Recorder

Posted in Land Projects
← Conserving Land for You (Annual Report)Land for Sale, Cummington →