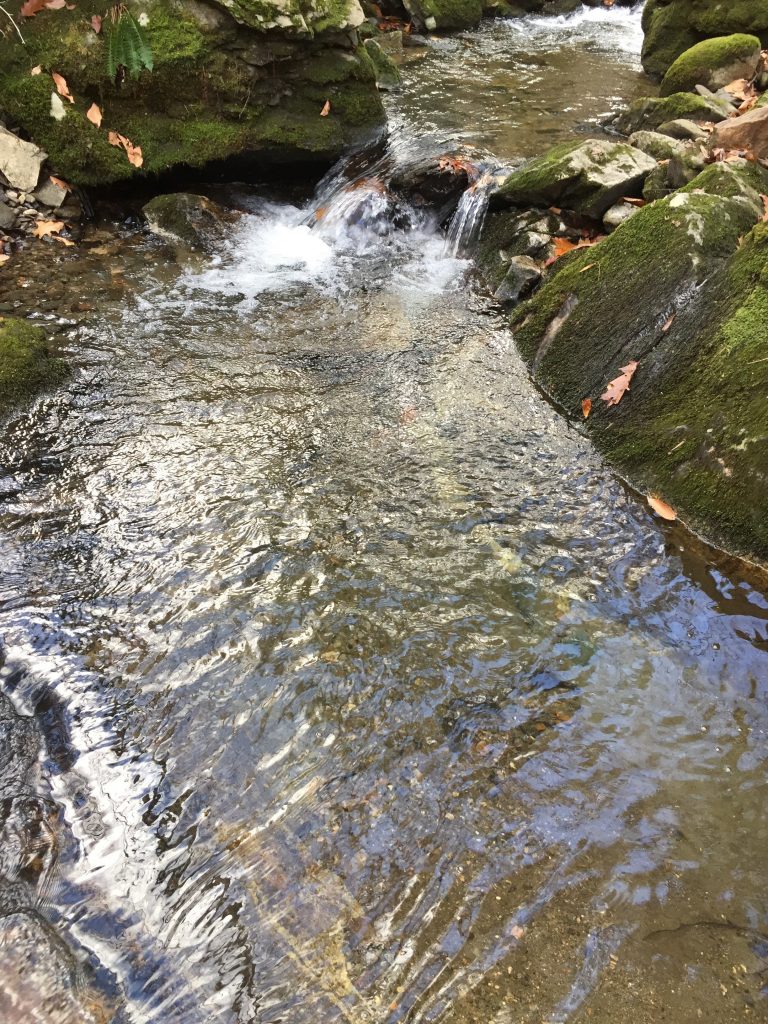 In 2021, Bill and Jane Obear put a Conservation Restriction (CR) on 41 acres of Bear Path Farm, their land in Whately, MA. This autumn, it’s easy to appreciate the green fields of their farm, the tall trees turning gold, and the delicious peaches and apples from their orchard.

But hiding in the winding streams crossing the property are secrets of natural selection. Protection here is not only a win for the environment—it also supports advances in scientific knowledge.

Since 1997 researchers from the USGS Conte Fish Research Laboratory have been closely studying Brook Trout from four tributaries of the Mill River that flow into the Connecticut River. One of these tributaries, Ground Brook, flows through the Obear property into West Brook which empties into the Mill River.

Data indicates substantial movement between three of the four tributaries which are a critical spawning habitat for Brook Trout. But a five-foot waterfall separates Ground Brook where it flows into West Brook. As a result, the fish in Ground Brook have had very little exchange with those in West Brook. And the exchange is one way. Fish from Ground Brook sometimes emigrate to West Brook over the waterfall, however, the reverse is, of course, impossible.

As a result, the isolated Brook Trout have been separated from the rest of the watershed for approximately 900 years. The combination of a small population, isolation and a unique environment in Ground Brook sets the stage for genetic divergence from the rest of the West Brook. Some of the divergence can come from small population size alone (random loss of variation called genetic drift) and some can come from natural selection. With small populations, some gene variants (known as alleles) randomly disappear completely and thereby reduce genetic variation

These trout are behaving in ways distinct from their distant relatives in West Brook. Researchers have found evidence of higher early juvenile survival and strong selection against larger body size, meaning that the trout in Ground Brook mature younger, grow slower, and have a shorter life span than the open system trout in West Brook. The difference between the two populations suggests that the isolated fish may be evolving to suit conditions in their small, one-way stream.

Isolated populations like these have a higher risk for extinction because they have a diminished genetic reservoir to respond to new conditions. Having closely adapted to their current environment they may not have the variation necessary to adapt to new ones. Any major change in their environment could wipe them out.

Thanks to Franklin Land Trust’s conservation of the Obear’s land, this sensitive goldmine of genetic specificity will be protected forever from human development.

The survival of these trout may be even more crucial than we currently realize. When organisms from two distinct genetically isolated populations are introduced to one another’s habitats, it can result in significant increases in population genetic diversity, a practice known as trans-location. As more of the world’s freshwater streams and rivers are cut off from one another by human development and trout become increasingly isolated, the fish in Ground Brook may turn out to be a key resource for the genetic rescue of other isolated populations.

Natural Heritage and Endangered Species Biomap2 shows that the Obear’s parcel provides Core Habitat For Species of Conservation Concern. In addition to practicing agriculture, Bill and Jane manage the fields and forests for wildlife habitat and timber.

“This place is a stroke of luck” says Bill Obear “the way the glaciers have carved small fertile plains with steep sides that encourage rich habitat for farmland, quality hardwoods, numerous feathered and furred animals, as well as Brook Trout surviving hundreds of years in an isolated cold-water stream. However, my wife Jane and I don’t think that luck helped us preserve 41 acres of our land in perpetuity. The leadership and assistance that The Franklin Land Trust provided over three years of discussions, meetings, application preparations and follow-through, led to our successful Conservation Restriction completed at the end of 2021. This is down to the successful application of lots of hard work by a remarkable conservation organization.”

To watch a video about the trout, please visit: https://www.youtube.com/watch?v=X1DquZC0hfc