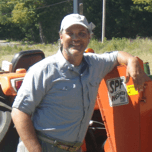 Will grew up in a small town southwest of Boston where he developed a love of working on farms and in the woods. After working as a teenager picking produce and apples, haying and working on large beef and dairy operations he received degrees in Natural Resources from Sterling College and UMass. Will has been a manager of a number of farms and a founding staff member at the Farm School where he taught forestry and agriculture, specializing in grazing systems. In addition, he worked as a research assistant on forest ecology projects at Harvard Forest. He has owned and operated a small forestry contracting business specializing in timber stand improvement, wildlife management and field reclamation projects. He has also raised flocks of Border Leicester and Scottish Blackface sheep and a herd of Murray Grey cattle along the way. He became interested in the conservation of working landscapes as he observed many of the farms and woodlots of his youth as well as the productive farmland in Bucks County PA, where he attended agricultural college, being developed at an astonishing rate in the mid 80’s. Will came to the Franklin Land Trust in 2000 as a part time land steward overseeing FLT’s early restrictions. He has been head of Stewardship at FLT since 2007.

Will enjoys interacting with the wonderfully diverse landowners who own restricted properties and overseeing the management of the conservation areas owned by FLT. When Will is not working he can be found playing with his sons Torsten and Macalistair in Shelburne.